Ikarians have a very different concept of time, an athenian friend had warned me, and they proved him right at the first occasion. „Are you comming to Raches“ the message read, that Angelos had sent. Sure, that´s why we had fixed an appointment after all. Having lived in Greece for quite some time i was aware beeing on time sharply was not a necessity, let alone on an island offering so many distractions worth while spending time to enjoy. Which Greeks always tend to understand, even more so the Ikarians, hence the question IF, not WHEN. 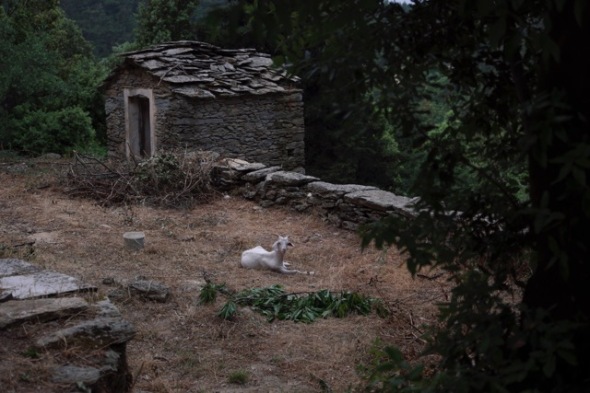 „Those Athenians, they can´t stop overexaggerating“, Angelos Kalokerinos tries to put things in perspective. I had been told shops on the island would open late at night and only close at dawn. „Actually it´s not that different from any other greek island, only we do still live at an agricultural pace. Especially up here in Raches“, the mountain- and hiking guide clarifies. „After having worked in the fields and orchards, tended to the animals and having eaten themselves they finally are free to go to town and do some shopping. That´s it!“

The Community of Raches resembles a couple of villages and spread out settlements actually making up for the western most third of Ikaria. The mountainvillage Raches itself, which actually is called Christos Rachon by its full name, being it´s capital. The other two thirds are named after their capitals Agios Kyrikos and Evdilos respectivly, both of them harbour towns, be it Evdilos only during summer season, whereas Agios Kyrikos enjoys a daily ferry service to and from Karlovassi on Samos. Ferry might be to big a word for the tiny vessel, not more than one van, some scooters and a dozen or two of passengers does it carry. The rest of the deck is being stuffed with anything that might be needed on the remote island, bags of cement and flour, toilet- and printing paper, even a compact electronic printing center, as the writing on the box says, is travelling to Ikaria. Even a handfull of tourists has made it on board, never too many, fortunately, as the Ikarians think, as that seems to be their bigest nightmare. Allready they look forward to high season with horror, when the Athenians will invade their island. 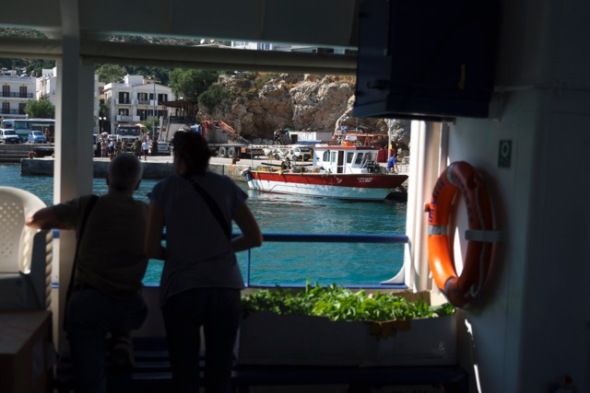 Of course the Ikarians view of mass tourism is a very particular one, as even in Armenistis, Ikarias declared touristic center, the number of accomodation is rather limited. In august there propably will be less tourists than in any average all-inclusive-resort on the minor asian coast across the narrow strait alone. Even then the long, white sandy beach, that made Armenistis the choice of sun seeking travellers, will never be as packed as you would expect. Now, in early June, you really have to look closely to spot the odd couple on the beach at all, never the less the both beach bars are allready open. „Oh yes, now it´s really beautifull and relaxed“, Maria states, „but in august the place will be packed!“ Which is no surprise, as „Bensao“, the cute establishment Maria is running, looks like a real magnet for surfers and beach bums. Artificial lawn to pamper bare feet, camouflage netting for the shade, cool drinks and tempting snacks to keep spirits high. „I don´t mind lots of customers in my place, but all the rubbish the campers leave behind really makes me sad!“

Looks like visitors from the mainland are not that wellcome here, even though Maria herself moved to Ikaria from there just two years ago. Back to ikaria, to be precise, having grown up in Attika she and her friend moved to their ancestors homeland in order to leave the stress and economic hardships behind, they expirienced in the vicinity of Athens. „You do live a lot more relaxed on the Island, the cost of living is a lot less, but most of all it´s the freedom here, we came for!“ In order to assure themselves of their decision, they have had the writing „Libertad“ tatooed on their forearms, the ccuban connotation being no coincidence. Ikaria is firmly in the communist hands of KKE, all three majors are being members of KKE, the hellenic communist party. Only once they failed, the former Governor of the Island being from the right, a socialist in fact, a lapsus that has been corrected quickly. Without question basically everyone on the island voted OXI, no, at the occasion of the recent referendum, she assumes, „as for the extra cost of transportation to an island most goods get quite a bit more expensive, once we get them. And still, the Troika wants us to pay higher VAT“, her friend explains some of the reasons, why Greeks like them are very unsatisfied with the orders they are getting from Brussels and Berlin.

After her days work in the beach bar Maria joins forces with her boyfriend, a jewellery designer, in their joint boutique in Evdilos, as working hours like in Northern Europe are unheared of in Greece. Evdilos, the quiet harbour, will liven up in July, when, once again, there will be a direct connection to Piraeus, puting it ahead of Agios Kyrikos in terms of importance for the summer. There´s a stiff rivalry between the two towns, regarding it´s role as the capital of Ikaria, that never seems to settle. It dates back to the times of the decline of Ottoman Rule, when the right honourable Doctor Joannis Malachias, in accordance with his Friend, the greek rooted osman Effendi, staged a local revolution against the occupying power, in order not to be annexed by the Italians after they drove the Turks out of the Dodekanese themselves. After the, as was agreed upon, successfull insurgency, the Ikarians wanted to take advantage of their new freedom, inviting the young greek kingdom to accept them as a new tributary. Hence a gunship was sent to present them with the state flag, the commanding captain steered the vessel into Evdilos, which he had identified as the capital. Which immediately caused the anger of the people of Agios Kyrikos, who intervened in their own favour. Whilst the Captain, having taken back the insignia he just had delivered, sailed around the island for the other capital, he was irrevocably ordered to join forces in the dardanelles. There his ships fighting power was urgently needed in order to push the otoman fleet further back into their bosphorus and finally end the turkish reign in the aegean. 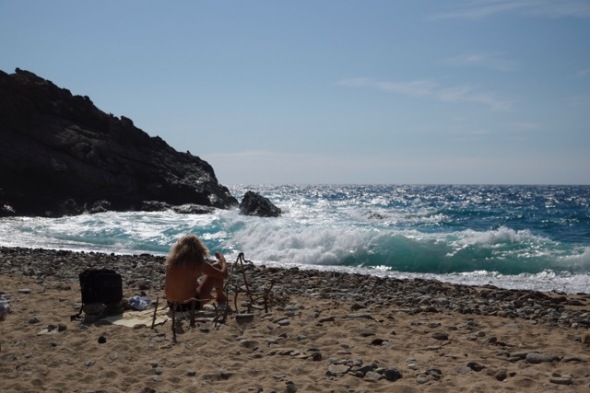 Liberated, still left alone, in July of 1912 the „Elefthera Politeia Ikaria“, Free State Ikaria was declared and only one or three years later -depending on which version of history you´d like to follow, the official or the local one- a state treaty was signed. „You´re supposed not always to pass on history as it actually was, as sometimes decisions are not taken according to a plan but by plain accident after reality allready has produced facts“, Angelos specifies. As well as the interseting detail, that the original treaty only had a validity period of one hundred years. Which noone seems to have noticed, with the exception of an austrian regular who wanted his favourite holiday destination to be closer, or as he put it, (geographocally!) annexed to austria and an austrian tabloid. They confronted the then Governor with the, slightly distorted, idea to join austria, he happily answered their questions full of favor for the ridiculous plan. „Which in the end lost him his office. Which did not make anyone shed a tear,“ Angelos reports. Did we allready mention, the Governor was a rightist?

But why does this guy Angelos know all that details abot Ikarian History, i asked myself. And then him, „because i was helping Prof. of the University of Chicago writing „Rebels and Radicals“, his standard reference on that subject.“ And adds that actually he himself has been a lecturer in mediaeval history. It was his wifes fault, he claimes, that made him move to Ikaria, „you don´t want to spend the rest of your life in your athens law office, right, she asked me while expecting our first child some twenty years ago. Isn´t there that piece of land your family owns on that island?“ Yes indeed, Angelos is a Lawyer as well, but he „made a lot of money designing and building stages for television. But we sold it all, took all, we could fit in our car with us, and left for good. Fortunately!“

Angelos crooked career might sound peculiar, but it´s quite typical for an Ikarian. In Agios Kyrikos the baker discusses Noam Chomsky´s Aspects of the Theory of Syntax, while in Trapalo, the deffinitely last village of the island, that is only connected to the rest of the world by a rough track hewen in the rocky coast, the local fisherman discusses austrian politics with his sole guest. They are perfectly informed about the coalition the socialdemocrats just joined with the right-wing populist party in a minor province. Looks like the plan, the staunch ideologists of greeks military junta, to deport leftist intellectuals to Ikaria so their crazy utopia would not find fruitous ground did anything but work out well.

Talking about fruitous: allthough Ikaria on the first look resembles an arrid rockformation composed of bare granite boulders and sharp edged slate shards it indeed is surprisingly green and humid. Save wheat anything, it seems, does prosper here, fruit, vegetables, pulses, almost all year round, on terrasses or the few plains. Inbetween sheep, fat goats, horses and even cows are happily grazing. Plus not at last Vines, which deliver wines that allready in Homers time have been praised, namely the famous pramneion. True to that ancient heritage Nikos Afianes and his wife are producing his very special wines in altitudes between 600 and 1000 meters in Profitis Ilias just above Christos Raches from grapes of the Fokianos and Begleri varieties using modern as well as quite ultraorthodox techniques. 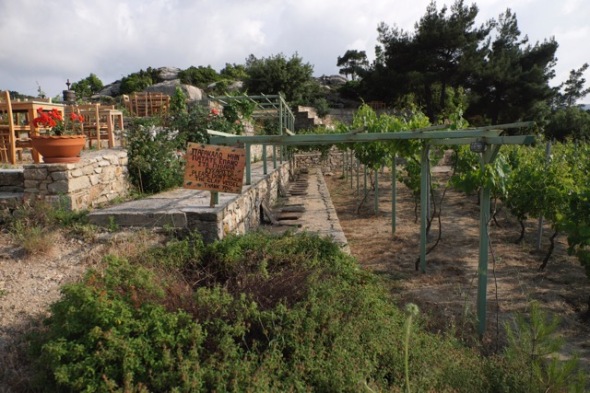 The blue fokianos becomes a classic, dry and strong Icarus with 13 % alcohol in steel taks or a voluminous 14,5 % when matured in oak, or a quite impressive rose champagne. Then there is TAMA, a shiny, amber coloured sweetwine, that was medalled at the International Wine Challange in London, where it ranked fourth among 11.000 wines present. But menawhile almost Afianes whole attention is absorbed by the recreation of Pramneion, which slowly developes in Amphores burried in the ground. „i do believe, one of the reasons for the Ikarains longevity can be traced through it´s wine. Like the vines, that drive their roots up to 30 meters down solid rock into soil and water, the harsh environment is also key to the physis of Ikarians. Plus, forsure, the natural way of living, litlle everyday stress, healthy nutrition, that´s grown locally. And of course the fact, that the people, up until recently, did walk quite a bit, to get their food. That´s natures prescription!“ 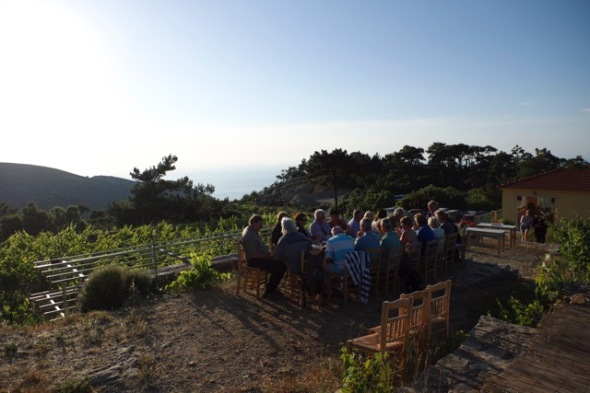 In the end however a bit of stress does come up as Nikos´ mobile rings. He´s listening to the voice at the other end of the line closely, ending the call with a brief „entaxi“, okay, „i´m coming in!“ It was one of his employees, sorry, she has to go on strike. Mr. Afianes shows sympathy with the unions goals, lays out the cryptic scheme of greeks helath system and the microbiological context of fermentation in clay amphorae before he takes his stand-in shift in the pharmacy. yes, he´s the pharmacist here, knowing that, it´s hardly surprising he does understand what´s going on in his wine. On Ikaria, it seems, not even the farmers work without academic education. 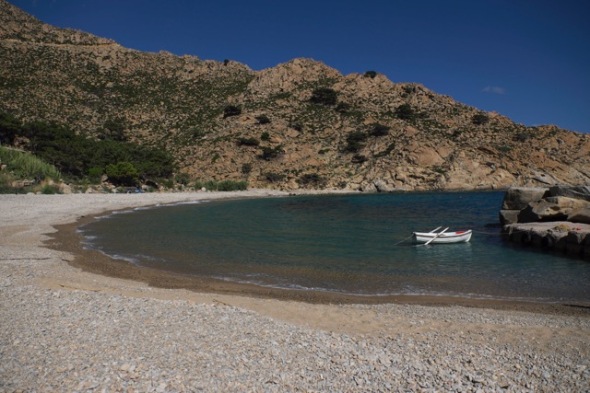 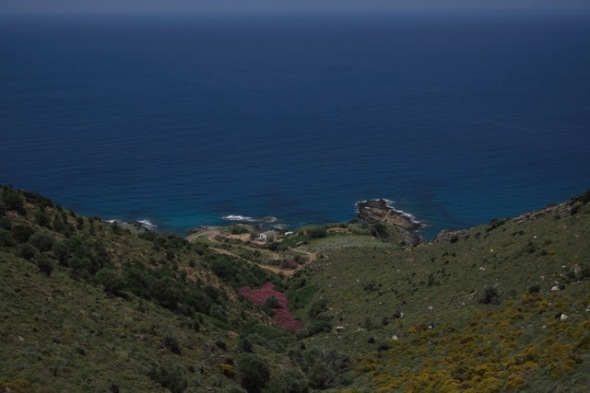