The experiences I had in Greece defined my future 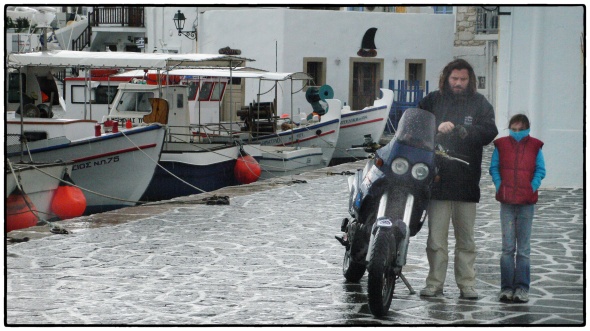 just out now on blog.discovergreece.com

I spent a considerable part of forty years of my life in Greece and the experiences defined my future. After spending some holidays with my parents there, I began to explore the island on my own and even married an Austrian woman on a barren island of the Dodecanese – nobody’s perfect! But she was the one who bought me a ticket to Athens, where I sought and found my fortune as photographer. I worked there ten years for many magazines and then I went to Paros. The year 2010 also brought many changes for me. Luckily, as a writer of guide books, I can visit Greece pretty often and check if everything is in order. And I like what I see. I´ll be back. This year I showed the country I long for to my new family, which was new to them. We went from Kerkyra to Lefkada and Delphi, plunged into Athens, relaxed at Pelio, took a breath in Thessaloniki. Just a little foretaste, a meze, so to speak.

I have so many unforgettable memories! Mostly they end with the sentence, “I think you are more Greek than us!” For example, a former Director of the Ministry of Tourism once asked me in a plane what the island we had just flown over was called. Another one is the holiday by the sea in Varkiza and the evening walks to the pastry shop. And then the ancient landscapes of the Peloponnese, archeological sites full of fantastic stories and history. Then, the islands, from Corfu to Karpathos, Agios Efstratios to Gavdos, white villages on the Cyclades, stone farmhouses at Pelio and colorful and neo-classical mansions. And the vast number of hospitable people everywhere, of which quite a few became friends.

Actually, when I get a craving for Greek food, I cook pastitsio or make a classic Greek salad with shredded cabbage and carrots. I can make beetroots with garlic sauce, meat stew or cuttlefish. It’s no problem for me, and after cooking, the whole house smells like Grandma’s. But none of this can take the place of grilled octopus and a glass of ouzo right next to the sea, and even wine out of a tin cup tastes better at the quay in Naoussa.

Every time I leave I take at least one box of Santé cigarettes! The blonde girl on the package used to be the only girl I came close to on the beach of Eressos in Lesvos when I was a teenager. And she hasn’t changed a bit since then!

My next destination is Paros. My olive trees need my attention, some pruning and weeding. Maybe I´ll finally have my own olive oil next year.